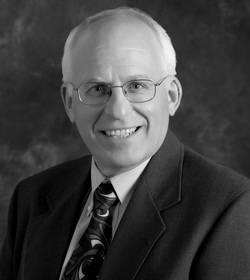 Dr. Michael MacNeil is an internationally recognized expert in the field of breeding and genetics research. His personal research has focused on practical avenues through which sophisticated animal breeding technologies can impact selection decisions by beef producers. He is author, co-author or editor of more than 350 scientific and technical publications (more than 150 in refereed journals). The value that others attached to his work is evidenced by more than 75 national and international invitations, consultancy, offices held and committee assignments in professional societies, numerous citations in the scientific literature, and use of the results by action agencies, beef producers, breed associations, and others.

From 1988 - 2011, Dr. MacNeil was the steward of the Line 1 Hereford population at Fort Keogh. During this time, Line 1 germplasm has impacted the Hereford breed in every country where Hereford cattle are raised. In addition, Line 1 has been the singularly most important source of bovine germplasm for genomics research.

Over the course of his research career, Dr. MacNeil has used long-term selection experiments to validate predictions made from estimates of genetic parameters regarding issues of practical importance. Data generated from the inception of the Line 1 population in 1934 through the present facilitated his demonstration that improvement via selection for defined goals was sustainable over an extended period of time. In addition, he used shorter-term selection experiments (10-15 years) to address issues of dystocia and maternal production efficiency.
Dr. MacNeil has developed widely used economic indexes that contribute to the NCE of most major breeds in the USA. His research in this area has also led to significant collaboration in South Africa and Brazil. However, these indexes are only as good as the evaluations of the component traits. Through his research, Dr. MacNeil led the American Angus Association to a unified evaluation of carcass traits that includes ultrasonic measures of indicator traits, phenotypic data from progeny tests conducted under commercial conditions, and genomic predictions of breeding value. He has also designed systems for the evaluation of feed intake based on data arising from central test and on-farm measures made directly on candidates for selection (American Angus Association), and from designed progeny tests directly relevant to commercial cattle (American Simmental Association). Recognizing that successful reproduction is the most important driver of profitability in commercial beef production, Dr. MacNeil designed and implemented a NCE of sustained reproductive success, predicated on the notion that annual calving was the paramount indicator of success, for the American Hereford Association.
Since 2008, Dr MacNeil has received several awards professional accomplishment, including: Distinguished Service Award from the Western Section American Society of Animal Science (2008), Distinguished Alumnus Award from South Dakota State University (2010), FLC Mid-Continent Notable Technology Award for “A new paradigm to predict genetic merit of Angus cattle for characteristics indicative of carcass value” (2010), Beef Improvement Federation Pioneer Award (2011), and Rockefeller-Prentice Award for Research in Breeding and Genetics from the American Society of Animal Science (2011). In 2012, the South African Society for Animal Science awarded Dr. MacNeil an honorary lifetime membership in the society. He was named a Research Fellow of the American Society of Animal Science in 2017.
At the end of 2011 Dr MacNeil retired from USDA Agricultural Research Service after a career of more than 30 years. He is currently engaged in several significant partnerships to enhance genetic evaluation of livestock and improve profitability of production. In addition, he continues working to train the next generation of scientists both in the USA and in developing countries.